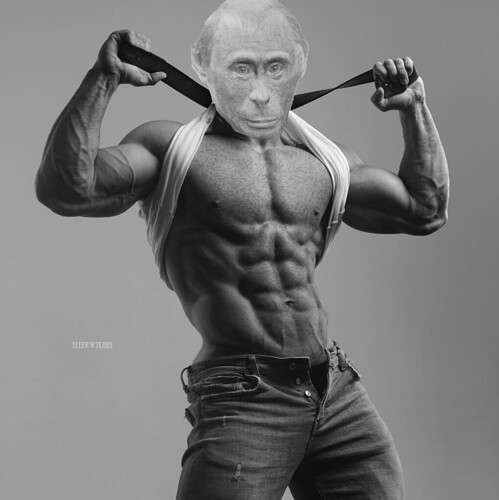 Walk through neighbors territory without a formal declaration of war claiming it’s a “special operation”
Try to go further but get stopped barely a few km from your own territory by gypsy farmers and trannies with NLAWs
The rest of your neighbors are now begging to join NATO or the EU
Get more sanctions than fucking North Korea
Completely isolate your country from everyone, including your closest and neutral allies
Unintentionally accelerate the centralization of NATO and the creation of an EU Army
Achieve zero objectives
“W-well uh, actually we never wanted Kiev despite saying earlier we wanted all of Ukraine”
Leaves

I believe this is Putin’s greatest failure. All this invasion has done is chase nations closer to the West, and embrace the arms of the EU and NATO, while also destroying the work and buildup he’s done with Russia ever since the collapse of the Soviet Union. Here’s just a few things on an international level that have suddenly happened ever since Soviet-Finland War 2: Non-Encrypted Boogaloo happened.

Finland wants to join NATO
Sweden wants to join NATO
Kosovo wants to join NATO
Hungary is awkwardly trying to stay neutral
Switzerland broke it’s neutrality for the first time in hundreds of years
Germany and Poland are building up their militaries to possibly become the largest militaries in all of Europe.
America is now increasing it’s military in Eastern Europe to levels possibly greater than before the Cold War.
Britain is possibly getting dragged back into the EU Single Market

Putin has effectively settled the debate on whether NATO is still needed or not. The answer to liberals now is: “Yes it is”. In fact I’d go further and claim he’s accelerated the ascension of a centralized NATO State, or an EU Military being formed. Russia isn’t playing second fiddle to NATO or America. It’s not even playing third or fourth fiddle. Russia is simply turning the pages for the EU Crescendo while occasionally begging them to buy gas. Man, what a great savior of Christianity and conservative values! A real savior of the white race as he brings Syrian and African mercenaries into Ukraine to rape and molest white women, and bomb historic churches! Truly, comrade Putin is too based for our feeble minds. 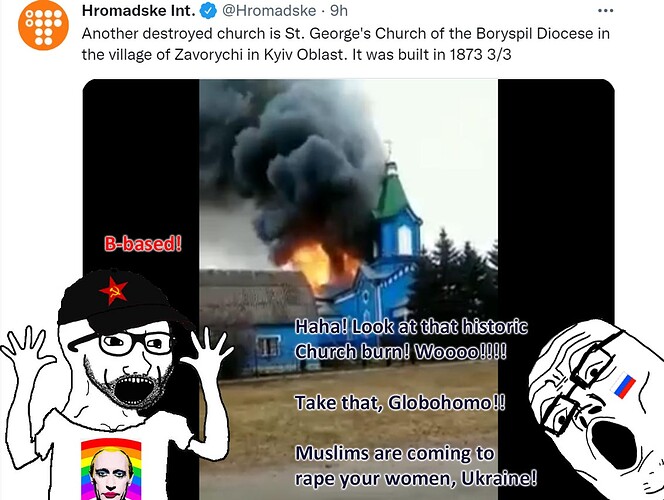 Now for the people who want to talk about how Russia is combatting “le globohomo” or “degeneracy”, Russia has so much more degeneracy than the West that it makes a meth addicted trannie furry look like an upstanding citizen. 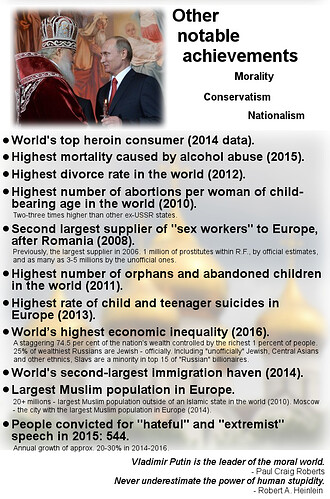 44% of Russians, which includes 1/5 zoomer/millennial Russians want to leave their country.

Russia has barely a 7% church attendance rate despite a majority claiming to be Orthodox and churches being built everywhere.

Russia is about to experience a “brain drain” as the EU is offering money for educated Russians to emigrate. They’re flying primarily either to Germany, or the US.

Russian soldiers also seem to love raping each other, and pimping out younger boys to their higher ups. It’s a hazing tradition called Dedovschina. These “based christians” can’t stop keeping their dicks out of little boys. Which surprisingly, getting fucked in the ass by a creepy old man doesn’t make you a good soldier. Probably explains why they’re doing so poorly in Ukraine.

Russia has also effectively lost the propaganda war. Images of slain citizens in Bucha, bombed maternity hospitals, and braindead Russian soldiers begging for food are circulating the clearweb and indoctrinating normies. I don’t care if you think they’re fake for some reason, or that it’s some kind of a super secret antifa super soldier operation by George Soros or whatever. If you think they’re faked by Ukraine or whatever, I’m going to politely ask you to pop your neck so hard that you unlock third person mode. A result of Russia doing so poorly in the propaganda war has caused Europe to unite against Russia, bring former Soviet Republics into NATO’s arms, and hate crimes against normal Russians in other countries escalating.

And if any of you think I like Ukraine and I’m some kind of NATO shill or whatever like most groypers seem to, consider this. I loved seeing what Russia was doing at first. The rebuilding of churches, the retention of the traditional family, the desire to bring a ruined country from Communism back on it’s feet to compete with the west…I loved all these! And Putin went ahead and threw all of it away as a result of him being surrounded by too many yes-men. He should’ve played the long game. Slowly annexing pro-Russian separatist regions and slowly getting closer to Europe. Which is what I thought was the plan.

“O-oh! But it’s not actually an invasion! But it is, but we never wanted Kiev! Despite saying before we wanted all of Ukraine and-”
If you genuinely believe throwing thousands of troops and young men to a meat grinder, and fucking up an invasion this badly, becoming a massive laughing stock to the world where even China doesn’t want to talk to you, and you can only sell your gas for cheap to India at a net loss for Russia was some sort of 4D chess move by le based Putin, and it was all his plan somehow to revive NATO and bring even more people into it’s fold, please go jerk off to whatever ZAnon posted on Incel Slava Z, telling you to “trust the plan”. Is Trump also gonna somehow get back into office too? 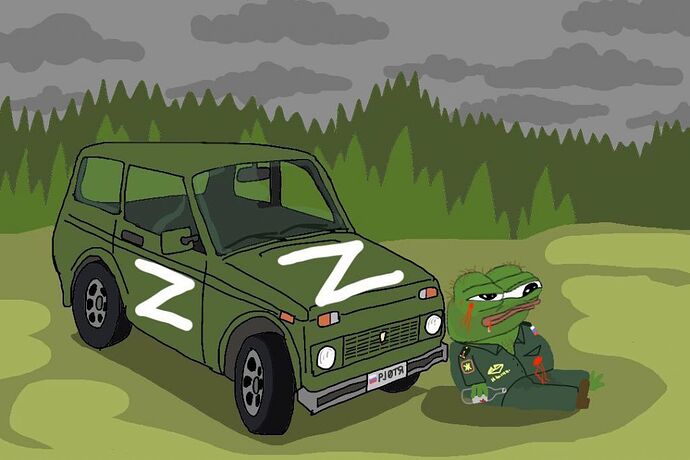 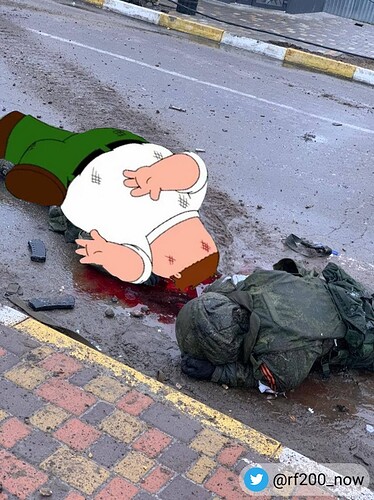 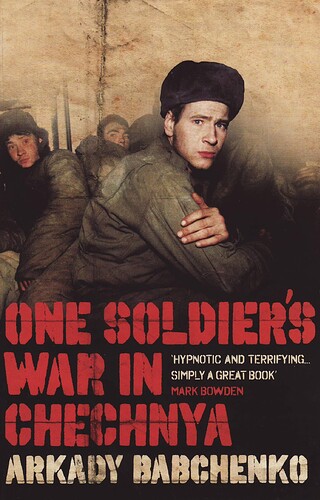 16463997993481492×2326 401 KB
If you’re interested in the inner workings of the Russian military, I encourage a lot of you to read this book. It’s a book about a soldier in the Chechen war, and his findings in the Russian military. It’s not a long read, and you can find plenty of PDF’s of it online. Here’s one passage from it.

In conclusion, do not put your trust in princes or sons of men. Le based Russia isn’t coming to liberate you or trigger the libs, or rape your ass in a military hazing. /pol/ does in fact have limits to it’s reach, and we might be seeing a new military domination of a neoliberal Europe that isn’t dependent on America as America does seem to be taking more of a back seat to Europe (which in itself is something I want to talk about later in another rant of mine). The best change you can make is within the communities around you. 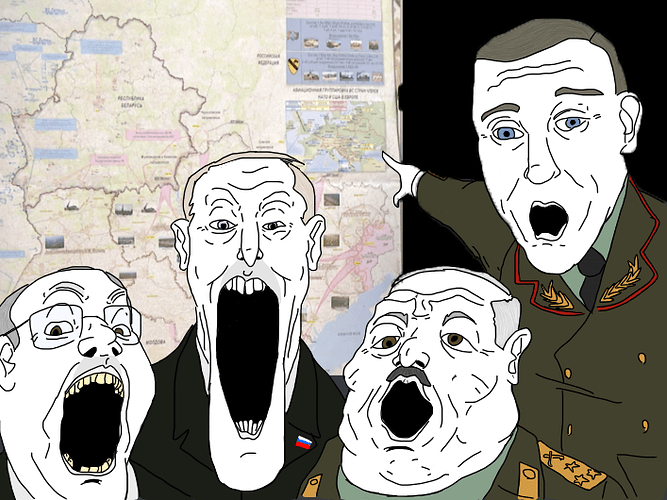 Lel, nice copypasta. Where did you get it from?

Source: The voices in my head when I take my adderall

Wow, LC is getting big enough to have JIDF shills. We finally hit the big leagues, boys.

when senpai notices you