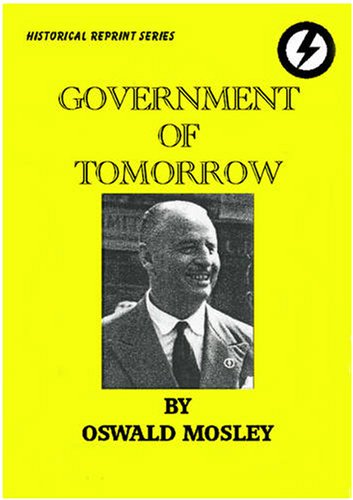 so i was reading Oswald Mosleys work “Government of Tommorow” where he outlines what he believes is a structure of government that allows the government to efficiently handle tasks while still allowing people the most liberty possible. The problem I see here is that what he outlines sounds more like a republic than a fascist government. Did Mosley, after getting locked away during the war with no trial, shy away from his fascist beliefs?

Even in his fascist days his politics bore a heavy republican/democratic flavour, as opposed to the pure authoritarianism of other fascists.

Iirc it comes down to his conception of fascism as the purest expression of the will of the people and that the English have always had a more liberal spirit than say the germans, and that this should be reflected in english fascism.

This is certainly true, but I feel in this work he takes it almost so far as to not be fascism at all but rather a sort of dissident republic. Can we really, when looking at things like the Doctrine of Fascism which outline its core principles, in good faith call what Mosley is describing fascism? Mussolini definitely leaves room for individual liberty, but having so much power to the democratic voting process and distributing power to multiple levels of government so as to impliment checks and balances feels completely at odds woth fascism entirely.

Which is why I’ve found the word “fascism” to have limited usefulness when discussing politics and doctrines, and as ideology it is only useful insofar as it means “authoritarian ultra-nationalism”. If fascsism aspouses political structures that ought to reflect the spirit of the people and enact the will of the people, then there is no doubt that “checks and balances” and high personal liberty are indeed very English traits that ought to be reflected in English fascism, which Mosley did. I’m not an expert in English history, but there is no denying that English liberalism has been an integral part of it’s history and that the tradition for checks and balances goes all the way back to the Magna Carta and the establishment of Parliament. Unlike most European nations, England never had absolute rulers for long enough for it to make a part of the English mindset so an autocracy would be foreign for them.

I’d argue that much of the same is true for the US and that if the US were to develope its own expression of fascism, it would be futurist etho-republicanism, rather than a traditionalist autocracy.

Fascism, the term in and of itself is a fairly “fluid” ideology. At its core you find unity, not class warfare, but class unity. Well Reflected is Mosley’s beliefs.