The following text is a copy/paste from an article that appeared in “The Australian”, one of Australia’s more balanced news outlets.

Scott Morrison will legislate to tear up Victoria’s multi-million-dollar Belt and Road Initiative agreement with Beijing, creating laws that will also ban a raft of other deals with foreign governments found to be against the ­national interest.

In an unprecedented move against Chinese interference and the protection of state secrets, the use of external powers under the Constitution to direct state, territory and local governments on ­national security issues will effectively kill dozens of agreements with foreign governments and ­institutions.

The Foreign Relations Bill, which will be introduced to parliament next week, also extends to universities and captures any questionable agreements between Australian public institutions and foreign governments.

In a major flexing of its constitutional powers, the Morrison government will cast its net over all foreign relations agreements struck by lower tiers of government, amid fears that national security has been compromised by often secret deals between state governments and foreign powers.

The move could have rippling effects for the private sector, with the Foreign Minister given powers to review any private infrastructure contracts that a state government signed as part of a BRI agreement with China.

The list of agreements that could be scrapped under the proposed legislation will range from sister city agreements, popular with local governments, to memorandum of understanding deals and include all legally and non-­legally binding arrangements.

Despite persistent warnings from the Morrison government and security agencies, Victorian Premier Daniel Andrews last year signed up to President Xi Jinping’s BRI program, which has been used across the globe to exert China’s soft-power reach.

The Victorian government’s BRI deal, which followed earlier MOUs and agreements with China, deepened co-operation between the state and Beijing on ­infrastructure, innovation and trade development.

“One of the most important jobs of the federal government is to protect and promote Australia’s national interest,” the Prime Minister said. “It is vital that when it comes to Australia’s dealings with the rest of the world we speak with one voice and work to one plan.”

Mr Morrison — whose calls for an independent investigation into the origins of COVID-19 and pushback against foreign interference and state-based cyber ­attacks have sparked anger in China — added: “Australians rightly expect the federal government they elect to set foreign ­policy. These changes and new laws will ensure that every ­arrangement done by any Australian government at any level now lines up with how we are working to protect and promote Australia’s national interest.”

Mr Morrison said where any agreement with foreign governments and institutions undermined the commonwealth’s efforts to protect the national ­interest they could be cancelled.

The crackdown on collaboration with foreign powers follows a security briefing the Prime Minister and ASIO gave national cabinet leaders three weeks ago on the sovereign threat posed by China.

The laws, which exclude commercial corporations and state-owned enterprises, are expansive and cover any arrangements ­already in existence with other foreign governments. Universities and state, territory and local governments will be forced to undertake stocktakes of all existing agreements and have them vetted by Foreign Minister Marise Payne. All future agreements they seek to enter will also be vetted and open to being refused or cancelled.

In addition to establishing a public register to make arrangements with foreign powers transparent, the Department of Foreign Affairs and Trade will review existing and new arrangements and ­advise Senator Payne on the implications for foreign policy settings.

State and territory governments, including departments and agencies, councils and universities must have their stocktake of agreements with foreign powers finalised within six months of the Foreign Relations Bill being brought into law.

The bulk of Australian government and university arrangements with overseas powers are linked to co-operation with foreign government-linked research institutes, universities, municipalities, states and departments in the areas of science, tourism, trade, infrastructure, education, culture and health.

In addition to China, other foreign partnerships entered into by states, territories, councils and universities — including agreements with organisations and governments in Iran, India, Russia, Israel, the US, South Korea, Singapore, Afghanistan and other countries — will be audited by DFAT.

Senator Payne said it was vital for “Australia’s prosperity, security and sovereignty” that foreign policy was driven by the national interest.

“There is currently no legislative requirement, nor clear understanding, that states and territories consult properly with the commonwealth on arrangements with foreign governments,” Senator Payne said.

“These changes will provide governments, institutions and the Australian people with confidence that due diligence is given to international arrangements to ensure they are consistent with our ­national interest and our values.”

The Morrison government’s new laws, responding to concerns raised by security agencies over ­research theft and espionage, are expected to attract criticism from Beijing and the university sector which rely heavily on international collaboration.

According to an analysis of research collaborations by the Australia-China Relations Institute, China was set to surpass the US as the leading research partner of Australian academics for the first time this year.

The framework set out the goal of increasing Chinese participation in the Victorian infrastructure rollout and allowing Chinese companies to establish a greater presence in the state. Victoria also agreed to send regular delegations of infrastructure companies and officials to China.

A “co-operation road map” was expected to have been completed by mid-2020 and signed by both sides, with further road maps to follow.

Just some more articles (plus this one because reasons) going along the same vein. These are all copies of articles written by various members of The Australian staff (or consistent contributers), I’ve just copied them to .docx format so that you don’t need to subscribe to read them.

Thanks for sharing, Jimbo. I quite like the moves Scomo has been making. Certainly Our best PM for decades

I still think that the Howard/Costello government was better (certainly less panicky, plus they fixed the economy (ish)), but ScoMo has his good points.

Couple of quick follow-ups on the situation, especially for the one in Victoria:

I am not as knowledgeable on Australian politics, but I am rather confident that this “national interest” stick will be used only against strategic adversaries, such as China. That is something to be wary of.

Another point that needs to be brought up is that while Scott Morrison is trying to play the nationalist card, saying that Australia will not let itself be influenced by other nations and state-run companies, it will most definitely turn a blind eye to globalist NGOs such as the Strong Cities Network.

Interestingly enough, Dan Andrews signed Victoria up to the Stronger Cities Network back in 2016. As I understood it, anything that undermines the national interest or allows foreign powers to control any part of the nation was treasonous, but apparently if it’s Soros owned, we’ll let it slide.

The long and short of it is that they are all politicians and, therefore, untrustworthy.

The relationship with China is not as one-sided as the government is trying to portray. By breaking up with China, Australia risks major economic problems and I doubt the US will compensate Australia’s loss. 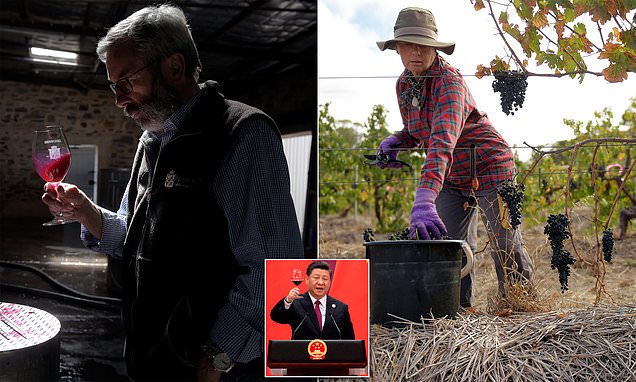 Australia's wine 'next in line' for crippling China trade tariffs

The wine export industry alone is worth $2.9billion, meaning $1.16billion is spent by China on Australian bottles annually.

The selfish upside is that perhaps the European market will be flooded with cheap Aussie wine and kangaroo scrotums.

We’ve sold our farmers out to China, but, which is the main issue that we call the deal “one-sided”. Prime Aussie cuts of meat go to China whilst the second-rate stuff gets sold to Aussies. Hell, we don’t even get the prime 'roo meat here and they’re a native animal.

We do benefit from China a great deal, but we are too dependent on them for our own good. We need to trade more with Europe and America than we do with China, and we need to look out for our own people before that happens. The whole thing smells all kinds of ways to Sunday and needs to be overhauled.